Fallingwater stands as one of Wright’s greatest masterpieces both for its dynamism and for its integration with the striking natural surroundings. Wright’s passion for Japanese architecture was strongly reflected in the design of Fallingwater, particularly in the importance of interpenetrating exterior and interior spaces and the strong emphasis placed on harmony between man and nature. The house was meant to compliment its site while still competing with the drama of the falls and their endless sounds of crashing water. The power of the falls is always felt, not visually but through sound, as the breaking water could constantly be heard throughout the entire house. The exterior of Fallingwater enforces a strong horizontal pattern with the bricks and long terraces. The windows on the facade have also have a special condition where they open up at the corners, breaking the box of the house and opening it to the vast outdoors. It is an iconic architectural masterpiece that will remain so in the hearts of Frank Lloyd Wright enthusiasts forever! 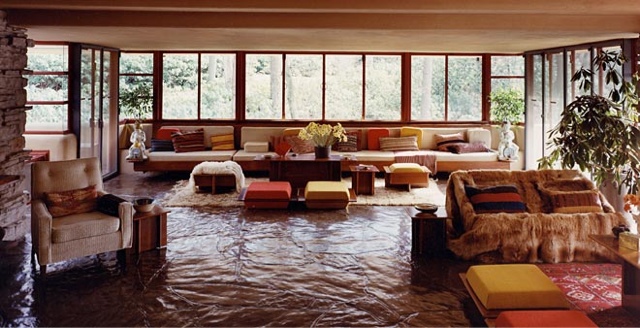